“Euro area statistics” is a website provided by the European Central Bank (ECB) and the national central banks (NCBs) of the Eurosystem.

The site aims to facilitate the understanding, use and comparison of euro area and national statistics. It presents the statistics visually, uses user-friendly terms and is available in all official EU languages.

Users of “Euro area statistics” can easily download statistics or share them by embedding the graphics into other websites, via e-mail or social media. The embed functionality may be useful for electronic news media and newspapers. You are therefore invited to share this tool or to embed it into your website.

The set of statistics presented is publicly available in databases at the ECB, NCBs and Eurostat, and can be viewed using PCs, tablets and mobile devices. It constitutes a core set of official statistics which will be gradually extended on the basis of demand.

This website is new. Your feedback is welcome via statistics@ecb.europa.eu.


The Statistics Paper Series (SPS) covers methodological and conceptual issues related to central banking statistics, new statistical topics and techniques. The Statistics Paper Series is published to stimulate discussion and to contribute to informing the international statistics community about work on improving methodological standards, with the goal of ultimately attaining more comparable and higher-quality statistics from all economic areas and countries.


This site aims to improve the understanding and accessibility of statistics. It is built on functionalities initiated at and shared with the OECD. See Compare your country. Other organisations engaged in statistics are welcome to join this collaborative model.

Permission is hereby granted, free of charge, to any person obtaining a copy of the work and associated documentation files (the "Software"), to deal in the Software without restriction, including without limitation the rights to use, copy, modify, merge, publish, distribute, sublicense, and/or sell copies of the Software, and to permit persons to whom the Software is furnished to do so, subject to the following conditions
The software is provided "as is", without warranty of any kind.
In no event shall the authors or copyright holders be liable for any claim, damages or other liability, whether in an action of contract, tort or otherwise, arising from, out of or in connection with the software or the use or other dealings in the software.
The Software is built upon and together with the OECD. See also OECD Disclaimer.
The ECB/OECD does not take responsibility for any replication of the content of the Software, or any other form of redistribution.

"Euro area statistics" is a service provided by the European Central Bank (ECB) and the National Central Banks (NCBs) of the Eurosystem. You are invited to share this tool or to embed it into your website.

The European System of Central Banks (ESCB) is committed to providing its statistics free of charge as a public good of high quality irrespective of any subsequent commercial or non-commercial use.

All publicly available ESCB statistics may be reused free of charge on the condition that the source is quoted (e.g. “Source: euro area statistics”) and that the statistics (including metadata) are not modified.

The ESCB subscribes to a policy of free access and free reuse regarding its publicly released statistics, subject to the standard ECB and NCBs "disclaimer & copyright".

Euro area households are continuing to borrow more to buy housing. The total outstanding amount of money borrowed from banks by euro area households for house purchase stood at €4.6 trillion in February 2020, which is approximately 40% of the euro area’s gross domestic product (GDP).

The annual growth rate of loans to households has followed a positive trend over the last five years and stood at 3.8% in February 2020 (see Chart 1). 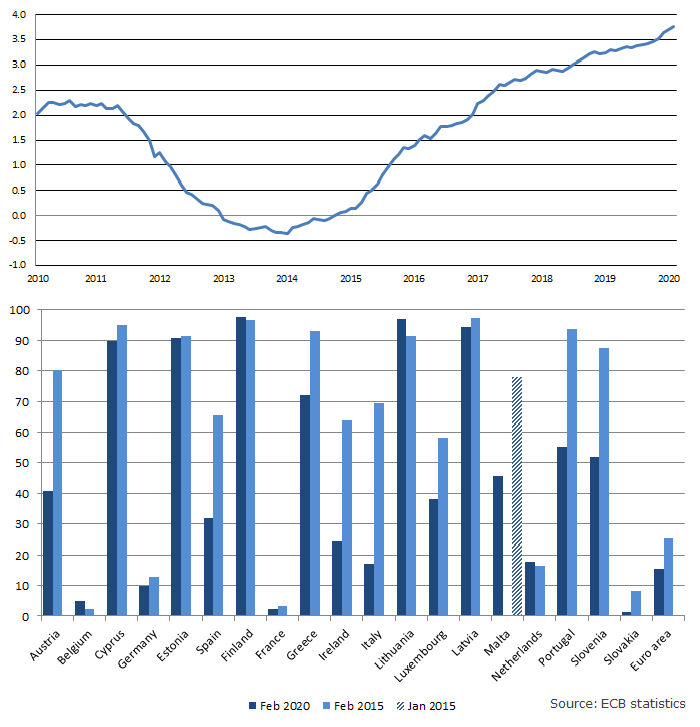 The rising demand for loans among households was supported by low interest rates (see Chart 2). In the euro area, average interest rates on new loans for house purchase fell from approximately 3.6% in February 2010 to 1.41% in February 2020. However, a closer look at country-level data reveals a broad variation in interest rate levels within the euro area, ranging from 0.77% in Finland to around 2.88% in Ireland in February 2020. These differences may reflect different national financial structures, household preferences (on the demand side) and supply-side factors.

For instance, differences in interest rate levels between euro area countries can partly be explained by different national practices in the use of variable and fixed rates (see Chart 3). In the euro area, the share of housing loans with variable rates was approximately 15% on average in February 2020, ranging from 1.5% and 2% in Slovakia in France, respectively, to 94% to 98% in Finland, Lithuania and Latvia.

The share of housing loans tied to variable rates in total loans granted is a meaningful indicator of how changes in interest rate levels may affect households. Loans tied to variable rates allow changes in official interest rates to be transmitted directly to households’ loan obligations. In contrast, contracts tied to fixed rates over a certain period of time serve as insurance against potential future increases in official interest rates by the European Central Bank.

Bank interest rates are one of several indicators used to assess the impact of monetary policy on the economy. They provide valuable information for analysing and assessing the transmission mechanism of monetary policy and the extent and speed of the pass-through of official interest rates, via market rates, to the lending and deposit rates offered to households and corporations.

Bank interest rate statistics refer to interest rates individually contracted between banks and their customers on loan and deposit agreements. In the case of loans, they reflect the amount charged by a bank to a borrower and can differ depending on various factors, such as the amount and duration of the loan, the security provided, the creditworthiness and sector of the borrower, the purpose of the loan and levels of competition in the retail banking sector. Bank interest rate statistics are calculated on new business and outstanding amounts converted to an annual basis and quoted in percentages per annum.

Bank interest rate statistics adhere to the same concepts, methodology and calculation methods across all 19 euro area countries and are therefore highly comparable across countries.

Loans
In line with international standards (European System of Accounts, ESA 2010), Regulation ECB/2013/33 concerning the balance sheet of the monetary financial institutions (MFI) sector, defines loans as “holdings of financial assets created when creditors lend funds to debtors, which are not evidenced by documents or are evidenced by non-negotiable documents”. Non-negotiability exists when ownership of a financial claim is not readily capable of being transferred. Loans also include assets in the form of deposits placed by reporting agents.

In MFI balance sheet statistics, loans to households can be broken down by purpose, such as loans for consumption (e.g. car loans), loans for house purchase and other loans (e.g. student loans).

In MFI balance sheet statistics, “lending for house purchase” refers to loans granted for the purpose of investing in housing for own use or rental, including construction and refurbishment, or for the purchase of land. Loans included in this category are those secured on residential property that are used for house purchase and other loans for house purchase made on a personal basis or secured against other assets. The category also includes (without being separately identified) housing loans to sole proprietors or unincorporated partnerships without legal status if the housing is predominantly used for personal accommodation.

The ECB uses the adjusted total loans to household series as the headline series for credit developments, since it provides a better view of lending to the real economy by euro area MFIs. The adjusted series includes an adjustment for sales and securitisations of loans removed from the balance sheet and for the impact of notional cash pooling positions resulting from cash management services provided by certain banks to corporate groups.

New business is defined as any new agreement between a household and a bank. New agreements comprise all financial contracts whose terms and conditions specify the interest rate on the loan for the first time and all renegotiations of existing loans. Prolongations of existing loan contracts which are carried out automatically, i.e. without any active involvement of the household, and which do not involve any renegotiation of the terms and conditions of the contract, including the interest rate, are not regarded as new business.

Outstanding amounts are defined as the stock of all loans granted by banks to households.

A fixed interest rate is set up for a specific period of time, which can be the entire duration of the loan. This fixed rate means that you pay the same monthly instalment on the mortgage, regardless of the economic conditions present in the market. If interest rates go up, it doesn’t affect your monthly payment. However, if interest rates go down, you don’t get the benefit of that either.

Find out more about statistics on loans and interest rates:

The state of the housing market in the euro area

Developments in mortgage loan origination in the euro area

HYPOSTAT 2019: A review of Europe’s mortgage and housing markets